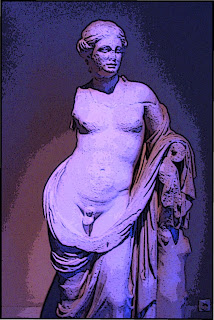 When is the last time somebody told you that there is not such thing. . . as you?

OK, perhaps that's not an experience you've had, but I encounter it periodically. This morning I had a frustrating experience with a person who insisted that intersexuality is a myth. He was certain that sex dyadism was an unassailable natural fact--that people and animals come in two flavors, male and female. In his mind, hermaphrodites and centaurs and dragons were equally mythic creatures, and equally likely to be waiting in line at the store with him.

Really, what this guy objected to was my appearance, which is androgynously masculine. He wanted me to "make up my mind." Basically, he objected to genderqueering on the grounds that gender identities must be dyadic because bodies are sexually dyadic. When I pointed out that I am actually intersex, he dismissed me as making a deluded, faddish assertion. He compared me to a furry, and dissed me and furries together as crazy folk possessed by a trendy madness. He told me to "grow up."

How would you respond to that? Am I expected to walk around with an MRI in my pocket? I've already posted how people don't get to do a pants check on me.

I choose to respond less personally, with empirical data, scientific and historical. Though in truth, when people are religiously attached to a belief in sex dyadism, all the empirical evidence in the world may fail to convince them to let go of their dogma. That was the case in my conversation this morning. Still, others may listen, so I share some data you can use should you find yourself in a position like the one I was in today.

Many--perhaps most--world religions incorporate divine androgyny. This reflects the presence of intersexuality in the collective unconsciousness. Angels in Judeo-Christian tradition are neither male nor female. In Greek mythology, the child of Hermes (the jock god) and Aphrodite (prom queen goddess of love) was Hermaphrodite, as seen in the image attached to this post. The ancient Egyptian god/dess of the Nile was Hapi, whose breasts and phallus were depicted as constantly flowing with fertility, like the Nile itself.

Some intersex advocates are uncomfortable discussing intersex deities in the world pantheon, because they feel it links us with fantasy. But mythos is based in fact--sometimes psychological, and sometimes material. It can be very useful. Psychologically, it can give us validation, and materially, it gives us clues to the historical past. After all, Homer's city of Troy was considered mythic until archeologist Heinrich Schliemann took the Illiad seriously and located and excavated Troy's ruins.

What the myths of the world show us is that intersexuality did not signify barren disorder, as it does to Western doctors today. It signified perfection (for the Judeo-Christian), beauty (for the Greeks), creation (for the Egyptians).

More important from the empirical position of "proof" of our eternal presence are the cultural traditions that societies have all over the world for giving social roles to the intersex. For example, I'm Jewish. Jewish religious practice is traditionally highly sexed and gendered--males are circumcised on the 8th day of life, females must immerse in a mikvah after completing a menstrual cycle. What then of intersex children? The gemara instructs that intersex children (and animals) are given two additional gender titles, androgyne and tumtum. A Jewish child whose genitalia include both a clitorophallus and an invagination is an androgyne, and must follow all of the rules applying to males and females. A child without significant external genitalia is tumtum and is exempted from all gendered rules.

Intersex people have been born into all cultures throughout history, so there are many traditions for giving them a place in society. As intersexuality has been erased by modern medicine, the meaning of these traditions has often shifted or been forgotten. For example, Native American traditions for giving a socially valuable place to the two-spirited are now typically understood as relating to lesbian, gay, or transgendered individuals, while the home they gave to intersex children is largely forgotton. The Hawai'ian role of mahu is another example. Today, the word "mahu" is often assumed to mean crossdresser, and has taken on a derogatory edge, like "fag." But in Hawai'ian tradition, intersex children were deemed mahu, and it was an important social role. Individuals who were mahu memorized oral traditions, were instructors of the revered hula, and were consulted when infants were named.

Intersexuality is common in pigs. The people of Vanuatu revered intersex pigs, and carved their likeness, genitalia and all, onto statuary and bowls. British farming tradition was less appreciative. Intersex livestock were called freemartins, and in some localities killed at birth. In the U.S., where the most revered animals are our domestic pets, intersex is studied by veterinarians in cats and dogs. Intersex conditions have been studied by scientsts in goats, in primates, in mice, in horses, in smallmouth bass . . . in fact, just about any animal you can name.

The Moral of the Story

Intersex happens. It always has happened; it's hardly some new discovery or "fad." In fact, the fad in the historical story is the recent medical erasure of intersex people, our surgical alteration, and the attachment of shame to our bodies. We've been made so invisible that most people in Western nations aren't even aware we exist, and can voice the myth that we are mythic right to our faces. Let's hope that this fad passes soon.