If you are looking around for information about intersexuality, one of the first things you're likely to read is that "most intersex children are assigned female at birth."  This is in fact false.

In the U.S. today, according to the CDC, one in 125 children assigned male at birth is surgically modified to fit that binary sex status.  The percentage of children assigned female at birth who are genitally altered in infancy to feminize their genitalia seems to be lower.  Exactly how much lower is very difficult to determine, since nobody is gathering the data we'd need to have.  The reason we know the 1-in-125 figure is because these children assigned male are all given the same diagnosis: hypospadias.  Hypospadias is the diagnosis given to most children born with intermediate genitalia who have external testes.  Rates of hypospadias have been increasing, and the CDC is collecting data due to concern about that.

The reason people continue to say that few intersex individuals are assigned male is that doctors term hypospadias a "penile malformation" rather than an "intersex condition."

I've written about this before in this post.  I noted there, "medical diagnostic categories are not logical, despite our ideology that they should be so. The majority of individuals born with intermediate sexual anatomies [and surgically assigned male] are not given an intersex diagnosis. I believe that what underlies this is gender ideology. And that gender ideology is this: masculinity is fragile, especially when it comes to what a man has in his pants. To live as a man with an inadequate penis is seen as intolerable. To have one's status as a 'real man' challenged is viewed as psychologically crushing. Thus, doctors feel, if they were to categorize someone as intersex and then assign them male, they would be acting cruelly.  Women, on the other hand, are perceived as more gender-flexible. After all, it's reasoned, a woman isn't shamed by wearing pants or taking on a power career. [Doctors view] female-assigned people as more comfortable with androgyny and as better at dealing with emotional challenges."  Because of assumptions about fragile masculinity and flexible femininity, doctors feel more at ease assigning children they designate as intersex female. Those they regularly surgically alter to conform to binary male sex norms, they wish not to label intersex.

I was contacted by some people after writing that prior post challenging my assertion that hypospadias is an intersex condition.  They countered that it was simply a minor displacement of the male urethra.  So I wanted to make my case more clearly.

Let's start with some illustrations.

All children start out in the womb with the same set of genitals, an intersex form.  As a rule I will not post photos of children's actual genitalia because it is exploitative, but in this case, I feel a medical image of the standard genital form of a fetus isn't going to cause additional emotional trauma to any particular child, so here's a photo:

Our society expects this intermediate genital form to differentiate before birth into two "opposite" binary sex forms (penis and testes, or vulva), but in fact, babies are born with genitals on a full spectrum between these two socially idealized poles.  Let's look at how medical professionals illustrate this sex spectrum.

When a child is diagnosed as having some form of XX, CAH, congenital adrenal hyperplasia, the sex spectrum is described by the "Prader scale," and the "stages" of the "condition" evaluated using this chart:

When a child with XY chromomes is diagnosed as having a form of AIS--partial or complete Androgen Insensitivity Syndrome--the sex spectrum is termed the "Quigley scale," and is illustrated like this:

You can see that both of these illustrations include 6 forms, although they number them in reverse order and with different numerals.  What they both show is that between a genital form considered typically female and one considered typically male, there is a common spectrum of intermediate forms.

This is equally true for children who are diagnosed as having hypospadias.   But medical illustrations of hypospadias are very different.  They do not picture the genitals as intermediate in form.

Instead of picturing the same range of in-between forms shown in the Prader and Quigley scales, medical illustrations of hypospadias variations show something odd: a carefully illustrated "normal penis" with a series of dots superimposed upon it to indicate the level at which the urinal meatus/ vaginal opening are located.

The penis is always illustrated as erect, and often with a lot of illustrative detail to emphasize the "reality" of this imaginary ideal penis existing instead of the intermediate genitals actually present in intersex individuals who have external testes. 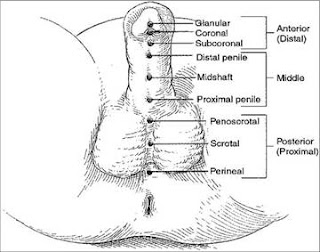 Let us be clear here.  A child diagnosed with hypospadias of an "advanced degree," be it termed perineal or posterior or scrotal, will have an intermediate phalloclitoral form with a substantial invagination, not a large, erect phallus with a dot at the bottom.  They'll look more like the Prader 2 or Quigley 4.  I'd illustrate such a child's genitals more like this: 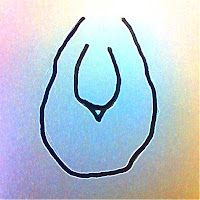 Why would medical illustrations of intermediate genitalia be representationally accurate in the case of intersex children diagnosed under the rubrics of AIS or CAH, but inaccurate if highly detailed in the case of intersex children diagnosed under the rubric of hypospadias?  Only gender ideology can explain this.  Children diagnosed with CAH and AIS are routinely assigned female.  But children with hypospadias are surgically "corrected" to male, and to undermine the "adequacy" of a male's phallus is treated as untenable.  Parents (and doctors!) must be reassured by looking at the erect, large, ideal penises drawn in the hypospadias illustrations that the genitally intermediate flesh of the child they see is illusory, and that an excellent penis will soon be revealed by the scalpel.

So: medical illustrations of hypospadias, and the medical assertion that it is not really an intersex condition, relate to our ideologies of masculinity.

The differences in medical approaches to intersex children routinely assigned female and routinely assigned male extend further than illustrations and terminology.  They also determine all the tests and evaluations the child will receive.  If an intersex child lacks external testes--the determining characteristic of a hypospadias diagnosis--that child is routinely subjected to a battery of tests: genotyping, endocrine screening, medical imaging scans.  This is not the case when an intersex child has external testes.  In fact, even suggesting that a child with intermediate genitalia but palpable testes receive any sex-related tests at all is considered "controversial" by doctors.  Since hypospadias is defined as a penile malformation that is not an intersex condition, why would anyone wish to test sex chromosomes, hormone levels, or internal reproductive structures?  It's presented as an unacceptable waste of time and money, in an affronted tone.

In fact, individuals born with hypospadias do commonly have other sex-variant characteristics.  An example is the presence of what is termed a substantial "prostatic utricle," a uterine structure that may be small or full-sized that connects to the vaginas present in these children at birth.  While the "pseudovaginae" are removed and closed during infant genital "normalizing" surgery, doctors do not test for the presence of a uterine structure.  People diagnosed with hypospadias and their doctors generally only become aware that there is a utricle present if something goes wrong, such as the development of uterine cancer or painful cysts--and then usually by accident during imaging scans for some other presumed cause of the patients' symptoms.

I want to note that many intersex people assigned female at birth complain of all the invasive tests and screenings and procedures to which they are subjected in childhood, so the fact that intersex children with hypospadias diagnoses avoid these is not necessarily a bad thing.  But not even thinking of checking for a uterine structure in someone born with hypospadias who presents to a doctor with pelvic pain could have very negative health consequences.

It is clear is that intersex children diagnosed with hypospadias are treated very differently than children with other intersex diagnoses.  Rather than being treated as bizarre and interesting medical cases that require a lot of medical study and intervention, they are treated as normal boys with a little urethral displacement issue.

The thing that children diagnosed with hypospadias have in common with other intersex children is that they are subjected to genital normalizing surgery that can have many negative consequences.  Medical texts list as unwanted consequences of hypospadias "repair" surgery urethral fistulae, strictures, and diverticulae, recurrent urinary infections, "excess skin," hair-bearing skin, persistent chordee, erectile difficulties, erectile persistence, chronic inflammation, and a condition called balanitis xerotica obliterans.  Textbooks are oddly silent on the issues of loss of genital sensation that are very common, and the fact that children born with genitals in the middle of the sex spectrum are particularly likely not to identify with the sex they are surgically assigned at birth.

Some children who are diagnosed with hypospadias have genitals that are quite close to the binary male ideal in our culture.  For them, medical interventions may be fairly minor, and the side effects may be modest.  They are very likely to see themselves as typical males, and are probably unlikely to wish to be identified as intersex because they share our society's pattern of fragile masculinity.  I am empathetic with their position.  But we should be able to support the gender identities and dignity of people born with hypospadias who identify as men without resorting to inaccurate medical illustrations and illogical medical taxonomies.

Hypospadias is an intersex condition.  The surgeries we perform on unconsenting intersex children without their consent have lifelong consequences.  These can be profoundly negative for children whose genitals are dramatically altered--something that intersex advocates decry all the time.  But we should also question why we routinely risk the loss of sexual sensation in the glans of the male-assigned child whose urethra is in a slightly atypical place.

All of us born intersex deserve to be recognized as such, and to be granted autonomy to make our own decisions about what "normalizing" surgical alterations we wish, if any.  Putting an end to the routine genital reconstructive surgery performed on the many thousands of children diagnosed with hypospadias each year should be considered an important point of intersex advocacy.