The Silly Idea of Your "Real" Binary Sex 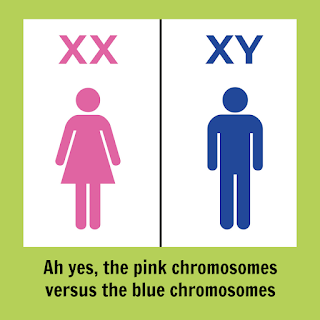 Today, a lot of people insist that they can tell you what your "real (binary) sex" is. Let's talk about how strange that is.

Intersex is a fact of nature, found throughout the animal kingdom and across all of human history. Today, in Western societies, being assigned a binary sex at birth is a legal requirement--you need an M or F selected on birth certificates in most countries. This is so taken-for-granted that people are often astonished to learn that this is historically and culturally strange--that most world societies have traditionally recognized more than two sexes, allowing them to recognize and provide cultural places for intersex babies, and social roles for gender-variant people. This includes, by the way, Judeo-Christian societies, up until the Middle Ages. Jewish tradition recognizes four birth sexes: female, male, both (androgyne), and neither (tumtum), and early Christians followed this tradition.

But in the Medieval period, Christian authorities decided to abandon the Jewish halachic approach. They decided that the Biblical phrase "male and female created He them" was not a poetic phrase, but a prescriptive one: God demanded binary sex.

The problem, of course, is that intersex people continued to be born. So you find court cases and church records in which judges and priests tried to decide what to do when there was a conflict over whether an intersex person (or even animal) was living in the "correct" binary sex, or "violating the law of nature" by being a man who menstruated or a rooster who laid eggs. Parties often fought vigorously, because the fact of the matter is that an intersex person or animal cannot be fit into the category "male" or "female" by definition, and what to do about that was a perpetual issue.

Then, in the 19th century, medical doctors seized on this issue and the social fascination with nature belying human ideologies of binary sex. The field of medicine was professionalizing and gaining status. And medical practitioners realized that they could gain social respect by claiming to be able to answer questions that laypeople could not. They said laypeople were confused when they saw a person with mixed sex characteristics, and could not categorize them as male or female. But medical doctors framed themselves as having impressive skills and arcane knowledge that laypeople lacked. They could dissect a person's body after death, examine their gonads, and usually, decide that those appeared to be ovaries or testes, only in rare cases finding those organs impossible to assign a binary sex status as indeterminate ovotestes.

Nineteenth century medical doctors seized on this process, as it proved successful in generating fascination and deference from the public. They proclaimed themselves teratologists (a term that literally means "having knowledge of monsters"), and declared that where unschooled laypeople saw intersexuality in a body before their eyes, doctors could determine a person's "true sex." And to do this, they announced that it was scientific law that one's "true sex" was defined by one's gonads. A person with a penis who had ovaries they named a "female pseudohermaphrodite," and a person with vulva and internal testes, a "male pseudohermaphrodite." Only people with ovotestes so intermediate doctors could not assign them as ovaries or testes, or those with one ovary and one testis, were "true hermaphrodites"--and this was rarely the case.

And thus, long before they developed the ability to perform sex reassignment surgeries on intersex infants, medical doctors erased intersex people through classificatory sleight of hand. And in so doing, they both increased their professional prestige, and propped up dedication to binary sex ideology in the face of its obvious factual refutation.

Then, in the 1930s, scientists discovered the "sex hormones"--testosterone, estrogen, progesterone, etc.. Gonads as anatomical organs lost their luster, as it was the hormones they produced that were the new subject of fascination. And for the next several decades, the idea that testosterone was the "essence of maleness" and estrogen the "feminine essence" was all the rage. Doctors made all sorts of strange assertions: they could "cure" an abrasive, nagging, shrewish wife with estrogen therapy! Homosexuality was caused by a hormone imbalance, as men with too little testosterone mimicked female behavior and desired a husband to dominate and penetrate them! Testosterone "causes" leadership, and high testosterone would make one a politician or CEO or general! Meanwhile, low testosterone would impede mathematical ability or the capacity to read maps!

Only it turns out that people of all sexes produce and require all of the sex steroid hormones. And that women who are housewives tending young children produce more testosterone than women who are employed outside the home in business careers. And that there are no hormonal differences between people of differing sexual orientations. Yes, testosterone causes the growth of facial and body hair, and estrogen the growth of breasts and hips. But there are endosex cis men with very low testosterone who are elite competitive athletes. As a way to determine supposed "true (binary) sex," hormones didn't cut it.

So, scientists and medical doctors dropped sex hormone levels as the way to determine the "true sex" of an intersex person. And they switched their focus instead to chromosomes--particularly, the presumption that all females have the XX genotype, and all males XY.

Now, we should note that by this point, there were doctors and scientists arguing that no single factor could determine a person's "true sex." This camp would go on to develop the language of "best sex" rather than "true sex" in choosing a binary sex assignment for intersex infants (which sounds nice enough, though the outcome was the same--by this time, forced surgical sex reassignment was presumed "necessary" by doctors across the spectrum).

But there was great appeal to framing a person's "true sex" as based on their chromosomes for medical professionals desiring to hold onto the claim that their scientific abilities made them into oracles, able to perceive and proclaim a "true binary sex" where laypeople saw a spectrum. Chromosomes cannot be seen with the naked eye, so they make an impressive divination prop. Take a cheek swab, subject it to esoteric technical tests, and mysteriously out would pop the answer: XX or XY, female or male.

In fact, the claim of a neat binary sex division in chromosomes also proved quite false. There are so many variations, including people with the genotypes XXY, XYY, XXYY, XYYY, Xo, and more. There are people who are XX/XY, having some body cells with XX chromosomes and some with XY. This "macrochimerism" is accompanied by totally normative "microchimerism" in people who have gestated. It turns out that fetuses and their gestating parents exchange genetic material, so a typical XX woman who has gestated an XY baby will have XY cells found scattered throughout her body. Then there are people who have typical-appearing male bodies who are XX, and vice versa.

In short, whatever tool medical science devises to divide the sex spectrum into two will always fail, because sex is not a binary.

However, there are those who are intensely devoted to the ideology of binary sex. These people have made a religion of it, and indeed, in the U.S. today they are often white evangelical Christians. But it can also be a secular faith--as we can see exhibited by TERFs. These are the trans-exclusionary radical feminists who screech that sex is an inborn binary that creates predator males and victim females, and frame trans women as males in dresses who pose a sexual threat to cis women. TERF ideology holds that sex cannot be changed, and that no matter what hormone therapies or surgeries a trans woman accesses, she will always remain "truly male" due to having an XY genotype that cannot be changed. This is a position of transmisogynistic bigotry, framed as "scientific fact." (That's hardly novel--the tactic of claiming one's bias is just a statement of scientific fact proved very potent in eugenics, culminating in the Holocaust. It's morally repugnant--but it's also effective.)

TERFs like to say that they have great sympathy for intersex people. They claim that most of us are disturbed by our status, and desire nothing but to have it corrected and to keep this medical past quiet, so we can lead normal lives. This position is the exact same one taken by doctors whose imposition of unconsented-to surgeries on intersex infants intersex advocates deplore. It also allows TERFs to frame intersex people who oppose their assertion that chromosomes determine "true sex" as at best unrepresentative, and as more likely charlatans--trans people pretending to be intersex to try to excuse their "delusional mindset."

But an intersex person need not be at all unhappy with their binary birth sex assignment to be appalled by Christian fundamentalists and TERFs championing the idea that one's "true sex" is determined by chromosomes. Consider a person with CAIS (complete androgen insensitivity syndrome). She has been assigned female at birth, having been born with typical vulva. Inside, she has no uterus, and what lie in the typical position of ovaries are testes. But because her body cannot respond to testosterone, and because some of the testosterone that those testes begin releasing at puberty is naturally converted to estrogen, she has developed breasts and broad hips in the course of a typical feminizing puberty, though she does not get a menstrual period. Her birth certificate says F, she was raised as a girl, her body looks like that of an endosex female, and she identifies as a woman. But according to the TERFs, because her chromosomes are XY, she is "really" a male.

This is just like how a 19th century teratologist would approach our intersex individual. Dissecting her body after death, they'd find that her gonads were actually testes, and declare her a "male pseudohermaphrodite."

And this is violence. Sex policing and misgendering are always violence.

The fact remains that no matter what scheme devotees of binary sex ideology dream up to try to force the nature of sex into two boxes, it will always be silly, and it will always fail. By nature, sex is a spectrum of great diversity. Our intersex bodies are real, and they are not evidence of disorder or failure, but rather of the beauty and complexity of all of the natural world. Any claims that science can determine our "true (binary) sex" deserve no more than eyerolling.

Older Post Home
Subscribe to: Post Comments (Atom)
Intersex people are supposed to lie low and keep quiet. Not me.
I'm not defective, I'm not disordered, I'm not ashamed. I just don't fit in your M/F boxes.