The Department of Inhumanity and Ideological Services 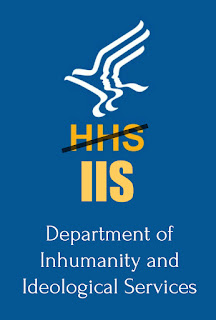 A memo was recently leaked from the Department of Health and Human Services. In it, the HHS defines sex as a binary determined by chromosomes (presumed to come in only two forms, XX or XY), and states that sex cannot be changed.

The memo has caused outrage, because its goal is to define gender transition out of existence. Its aim is to discriminate against trans people, declaring them to be deluded or deceptive, their lived genders irrelevant. In so doing, it ignores the conclusions of every mainstream medical and psychological association, which is a bizarre position for a department supposedly aimed at recognizing and supporting medical treatment paradigms to take. Unrecognized as yet is how this proposed policy would also work to shatter the lives of intersex people. As is so often the case, intersex people's lives and needs go unrecognized, so in this post I will try counter that.

First, we need to understand where this memo is coming from. The Director of the HHS Office of Civil Rights is currently Roger Severino. He used to work for the Heritage Foundation. He has no special knowledge of medical issues--he was hired by the Trump administration to please conservative Christian groups. He is an advocate of conversion therapy for LGBT people. He says being LGBT is "against biology." He believes in a radical conservative Christian ideology that states that patriarchy, heterosexuality, and cisgenderism are compelled by the Bible and nature, and that Christians are forbidden from tolerating gender egalitarianism or LGBT people. Unsurprisingly if very sadly, rather than doing his job as Director of the HHS Office of Civil Rights, which is to see that the medical needs of all people, as understood by the medical profession, are met, he is seeking to impose his ideology. Rather than fostering humanity and human services, he seeks to advance discrimination and a radically conservative ideology of sex and gender.

What's especially insidious is that this extremist political position is not being proposed for debate--not that human rights recognized by the UN and international community should be debatable. But by inserting its bigoted assertion--that sex is a binary determined by chromosomes that cannot be challenged or changed--into the HHS definition, radical conservative Christian ideology is disguised as scientific fact. This is a common tactic today in that segment of the far American right that seeks to dismiss scientific consensus. They find some person of supposed authority who will ignore what the vast majority of experts affirm to be true, and present the assertions of that person as "disproving" the voice of the vast majority--this is very evident when we look at their approach to defying the national and international consensus of climate scientists.

In this case, the action is even more radical. The idea is to have the institution created to protect people's rights to health simply declare gender transition invalid. Many Americans will be unaware of the politicization of what is supposed to be a scientific body. They will believe that the medical profession actually opposes recognition of trans people's identities based on scientific study. Therefore, they will believe they need feel no guilt when gender policing people, and discriminating against those whose appearance strikes them as insufficiently conforming to binary sex and gender expectations.

As an intersex person who has gender transitioned, I can attest that if this proposed policy becomes law, trans people--some of whom are intersex--will suffer greatly. This is the aim of the radical conservative Christians who have been given an outsized voice by the Trump Administration. I have lived a decade in my identified gender as a man. My wife, an intersex woman, started her gender transition over two decades ago, as soon as she turned 18 and could control her own medical destiny. These decades of our lives, our gender identities, and the understandings of our friends, families and colleagues would all be declared lies. Humiliating us by misgendering us would be proclaimed "healthy." Discrimination against us would be declared justified.

But many more people than just trans people would suffer. The majority of intersex people in the U.S. today do not gender transition. But all of us have been fighting for social acceptance, for an end to infant genital surgeries that rob us of the capacity for sexual sensation, and against the stigmatizing and concealment of physical sex variance. Our battle as intersex people has been for recognition of the sex spectrum, and for respecting our physical sex diversity.

Think what will happen to us now. Consider, for example, those of us who have complete androgen insensitivity syndrome, born with female-typical genitalia but XY chromosomes. Virtually all people with XY, CAIS are assigned female at birth and are raised as girls--but suddenly, they'd be declared men. This would disrupt not only their lives, but those of their parents, their spouses, their neighbors and friends. Or consider all the children born with intermediate genitalia. Doctors have forced surgeries onto so many, basing their decision on factors like gonads, or surgical convenience. Suddenly, many intersex people would find that the surgeries forced on them took away the parts of their bodies that the new HHS policy declares to be the ones that should have been kept under the new chromosomal standard. This will compound their trauma--and perhaps lead to a further round of unwanted surgical interventions.

For those of us intersex people whose chromosomes are XX or XY, this new policy would counter all of our efforts to push back against forcing sex reassignment surgeries onto us, mutilating our genitals. Instead, the policy would declare that these are not sex reassignment surgeries at all, because our penises are "false penises," our vaginae "fake." And for those of us who have one of the many other sex genotypes this policy fails to recognize--XXY, XYY, Xo, XX/XY, etc.--ironically, even if our bodies have appeared typical enough that we've escaped surgical mutilation or social stigma, suddenly, we become the "true intersex," our lived genders falsified, leading to confusion, discrimination and shame.

The intersex community's central goal for many years has been to put an end to nonconsensual infant genital reconstructions. And our best bet for seeing this happen has been to educate parents--to let them know that intersex status is fairly common and in no way a tragedy, so long as children have the respect and support of their communities. This HHS policy would undo our good work in parental education by declaring to parents that what we've been telling them is false. The HHS policy says that only binary sex can be recognized, physical sex variance is intolerable, and "corrective" surgery a necessity. This is a tragedy for our community.

The deepest irony here is that we as intersex people have bodies that prove that this proposed HHS policy is, to be blunt, complete BS. Sex is not a binary--empirically speaking, it is a spectrum. If you look at world societies over history, most have recognized more than two sexes. This is not because until the modern West appeared with its binary gender ideology, everyone was deluded--it's because there have always been intersex people. The capacity to attempt to erase us surgically is only a century old, and other societies dealt with us very differently--by recognizing and accommodating us. Sadly, binary gender ideology is so passionately adhered to in our society that most Americans are unaware of both this world history of diversity in social sex categories, and of the prevalence of intersex people today.

And what this proposed inhuman policy does is attempt to codify that ignorance, declaring binary sex ideology the law of the land. The aim is to trample upon trans people--but the victims will include intersex folks, and empirical truth.


Posted by Dr. Cary Gabriel Costello at 1:56 AM