What If We Treated White Femme Celebrities Like Caster Semenya? 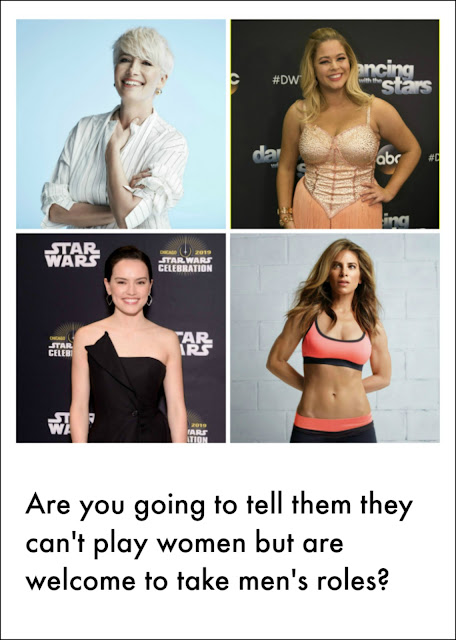 South African track star Caster Semenya has been barred from competing in her races in the Olympics because her body naturally produces higher levels of testosterone than is considered typical for women. Oh, but this is not discrimination, says the International Association of Athletics Federations, because she is welcome to compete in the men's races instead!

I've written at length before about why policing women's naturally-produced testosterone levels and banning them for being intersex is both morally wrong and nonsensical. Testosterone is not a magic elixir of male superiority--that's a ridiculous myth. And even if we imagined that it were, all Olympic athletes have atypical bodies. Swimmer Michael Phelps, world recordholder of 28 Olympic medals, has been the subject of lots of reporting celebrating him as a "mutant." (He is double-jointed, with very unusual body proportions, huge lungs, and muscles that only produce half the amount of lactic acid when exercising than normal.)

But let's not go over all that again. I want to address another issue: that the women being singled out, tested, and excluded for having high testosterone are vastly disproportionately women of color from the global south who are perceived as "too masculine." And often, it is feminine white women competitors who have demanded that they be tested. "Experts" relied upon in Semeya's case have used explicitly racist imagery in their presentations of her as posing some sort of threat to "normal" feminine white women competitors.

It seems pretty glaring that the reason Caster Semenya is being policed so intensely is that she is a queer black woman who is strong and muscular, and not interesting in performing femininity with long hair or nails for the comfort of certain others. And by "certain others," I mean all those policing bodily binary sex and gender expectations: misogynists who deem athleticism in women to be unattractive, and bigots like homophobes, transphobes, and those who deem intersex bodies horrifying.

So let's think about the outcome in a different context. Instead of strong brown athletes, let's look at women who are white feminine celebrities. Let's imagine that before we let them take women's roles in movies or television shows, we tested their natural levels of testosterone.

All of the women I've shown here would fail, because they all have high testosterone caused by PCOS, polycystic ovarian syndrome. Each of them has spoken to the media about it. Emma Thompson has talked about her struggles with infertility related to PCOS; Sasha Pieterse has explained that PCOS caused her to gain weight; Daisy Ridley has shared with fans that she battles PCOS-related acne; and Jillian Michaels has talked about her path to adoption after years of attempting to conceive despite her PCOS.

Each of these celebrities has a natural testosterone level outside the norm for women. Why then do we not classify them as having "hyperandogenism," as we do women excluded from athletic competitions? Why, because they are paragons of white femininity in the public eye! Daisy Ridley did acquire a misogynist hate-following from men who were angry at her Star Wars character Rey. But they were angry because they didn't want a "girl" to be the hero Jedi, they wanted a masculine white man. Jillian Michaels might have gotten a backlash because she has a strong, muscular body--something we associate with high testosterone. But she performs the role of the feminine personal trainer, and spent years policing the bodies of fat people on The Biggest Loser, so she got a pass. Sasha Pieterse was widely mocked and trolled in social media about her body--but this was fat-shaming, not policing femininity. Like many people with higher levels of testosterone, she found out that what this made her was fat, not "buffed," and her curvy body never triggered the stereotypes that high testosterone must make you butch.

So, these celebrities with atypical hormones have not faced the testosterone police yet--but imagine if they did. Imagine if some group started challenging women celebrities, claiming that some were bad role models, or taking acting roles away from "real" women, because they had "male" levels of testosterone, which gave them an unfair advantage. Those making this claim could back it up with a wide array of empirical evidence: actors who are men are given more speaking parts in movies; they are paid more; directors are much more likely to be men. They could claim men have a natural advantage due to testosterone giving them more assertiveness and "drive," making them by nature more compelling actors, more competent directors, and naturally running the entertainment industry.

Yes, that would seem obviously bizarre and nonsensical. But people used to make just this argument; it's simply no longer accepted. We no longer buy the old scientific studies, controversial but widely believed in their day, that it is their high testosterone that causes men to dominate politics, business, academia and the arts.

So imagine that each of these celebrities were treated like Caster Semenya, or Duttee Chand, or Maximila Imali, or Evangeline Makena, and had the same experience as these strong brown athletes. They would be excluded due to naturally high levels of testosterone, shamed, and presented as "cheaters." They would be framed as not really women, despite having been assigned female at birth, raised as girls, and identifying as women today. And they would be highly unlikely to feel comforted by being told they were free to try out for men's roles.

If you think it would be nuts to tell Victoria Bechkam or Emma Thompson that they are not really women because they have high T, then you should think the same about Caster Semenya.
Posted by Dr. Cary Gabriel Costello at 11:55 AM